THE MODERN ART OF SELF DEFENSE

“Self-defense is like a living organism. For it to survive, it must adapt to the constantly changing environmental influences”

What is KOMAK? Translated from Persian KOMAK means “help” or “helping”. KOMAK is a self-defense system that Ehsan Montaseri has been developing since 2014. It was recognized as an independent system in the 6th Suisse Martial Arts Hall of Honor on September 21, 2019.
KOMAK is characterized by its simplicity. The core is to provide a few efficient techniques for many different types of attacks. As videos of surveillance cameras and experiences show, an attack often happens unexpectedly, quickly and fiercely. 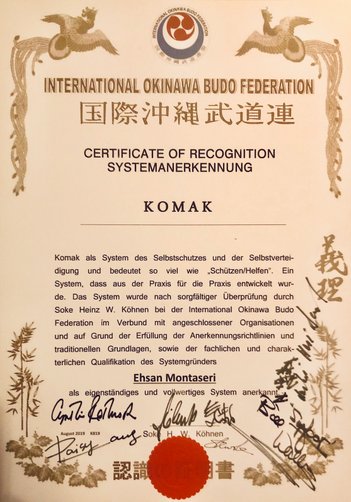 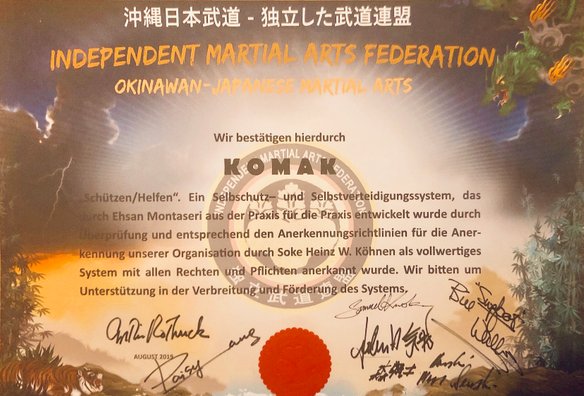 Molesting, pushing, grabbing, a clout, a punch, a kick – suddenly the attacker holds a knife in his hand and it comes to an end. Of course, there are different techniques to fend off shoving, break from a grip, block a clout or fend off punches and kicks. But such a process takes place within two seconds and the attacks follow seamlessly into each other. Is it really reasonable, without lifelong practice, to select and execute the right technique out of a repertoire of more than a hundred defensive techniques when a surprising attack take place?
Ehsan Montaseri‘s KOMAK offers a simpler solution for attack situations with the simplest possible counter attacks and KOMAK always considers the question “what if?”. What if I’m not just pushed, but also grabbed? What if a hidden weapon is involved? What if he suddenly releases his grip and punches? What if he’s not alone?

One more great advantage is, that these techniques can be executed while standing, lying down or while being pressed against a wall, because it is always a situation-related modification of the same basic idea: To maintain your own combat power, at the same time restrain the opponent and create the highest possible damage in the shortest possible time, in order to end an attack immediately.
Self-defense and emergency aid. Help yourself, help others. KOMAK

Why another new system?

There are various excellent self-defense techniques from many martial arts systems that are used in the KOMAK system. However, martial arts are much older than the Criminal Code, which forms another base for KOMAK. Some defenses or counter-attacks may be efficient, but legally questionable.
KOMAK is adapted to the legal framework (not just the German legal framework), both for self-defense and for emergency aid. Unfortunately, people are afraid to help others because they fear the possible consequences, a lawsuit for assault or even manslaughter. So, not only is a good training important, but also knowing how to behave after an emergency situation has taken place is very important. E.g.: Do you know that under German law you are required to provide first aid to the attacker? Important to know: First aid is only necessary in a reasonable frame. But at least one emergency call has to be made, otherwise you can be prosecuted for failure to provide assistance.
KOMAK has adapted defense techniques from martial arts to existing laws. Along with the idea of providing the fewest possible techniques, it was necessary for KOMAK to begin from scratch and create a system based on both a practical and legal foundation.

What do the experts have to say about KOMAK?

In the above video Cynthia Rothrock discusses the KOMAK system at the 6th Suisse Martial Arts Hall of Honor on September 21, 2019.

Not only the simplicity of the system was well received by the professionals, but also the realistic training. A new technique is learned slowly and “statically”. An attacker gets up, with a rubber knife in his hand and “strikes” towards the stomach. The defender practices the movement. The exercise is repeated until it’s consolidated. KOMAK does not stop there. The rubber knife is replaced by a dull knife to represent a higher risk and also to give appropriate “biofeedback”. You can’t feel your mistakes by using a rubber knife and therefore practicing only with a rubber knife is dangerous.

Even more dangerous is getting into a routine with your techniques. Constant changes of training partners is important, as well as realistic attacks. The technique is mastered and then ratcheted up, more stabs delivered more violently with the next attack. On top of that, add a grab of the defenders shoulder or the pull of the defender’s hair unexpectedly. What, that was not part of the practice technique? Good, because having a set technique is also not part of a real attack. As Mike Tyson said, “Everybody has a plan, until they get hit.”

KOMAK is designed to enable the defender to be assertive, even when things are not going well. In stressful situations, adrenaline, anxiety and excitement heightened and certain things will not go as expected. People must train for the unexpected and learn to react in ways that will save their lives. How you train is how you will respond. KOMAK is training to live.

Komak was recognized as a system at the 6th Swiss Martial Arts Hall of Honor on September 21, 2019 where Ehsan Montaseri was able to share his KOMAK system and get feed back from fellow martial artists from around the world, including Cynthia Rothrock.

WHAT IS THE AIM OF KOMAK?

Teching Book to the System

-The first edition available on amazon-